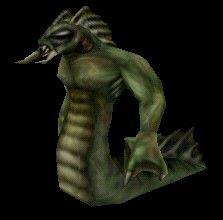 The slith is a green reptillian creature seen in many places on the Nali homeworld. Due to a number of shared physical traits, it is suspected that the Slith is a genetic ancestor of the Skaarj race, though this is purely a matter of conjecture.

Due to their physical and mental traits, sliths are extremely slow and ungainly on land. However, they are quite nimble and fast when swimming in water. Against an enemy, a Slith will attempt to use its claws if up close, and will spit globs of acidic saliva at a target located a distance away. Finally, it is of note that Sliths are fully immune to all forms of poison or acid, even to the point that they can swim freely in toxic slime without fear of injury.

ClawDamage
The amount of damage that a Slith does with its claws when it attacks a target in Melee range.

Ike Bart: I've seen them used in slime pits in the Operation Na Pali single player level pack. I don't know how they are used in the original Unreal level packs.