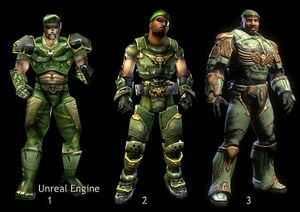 The original Unreal Engine debuted as the back-end for the 1998 first person shooter Unreal. The Unreal Engine later found it's place as the engine for other games such as Unreal Tournament, Deus Ex, Wheel of Time, Klingon Honor Guard and others.

The second generation of the Unreal Engine powered games such as Unreal 2, UT2003, UT2004, Unreal Championship 1 and 2, XIII and others. Major new features not present in the original engine include hardware meshes (aka. StaticMeshes), fluid surfaces, terrain support, complex materials, particle emitters, volumes, and more.

The third generation of the Unreal Engine is one of the most popular versions, being widely used on PC, PS3 and Xbox 360 games. Unreal Tournament 3, for example, is available on all three platforms. Other Unreal Engine 3 games include Gears of War 1 and 2, Mass Effect, America's Army 3.0 and many others.

Many new features have been implemented since Unreal Engine 2, such as level streaming, Kismet scripting, as well as complex material and particle editors. Also, as part of the Integrated Partners Program licensees can select from many third-party components to integrate into their games.

Not much is known about the upcoming fourth generation Unreal Engine, except that Tim Sweeney and maybe a few other people are working on it. Unreal Engine 4 is supposed to target the next generation of consoles.